It’s not the first time we hear about the upcoming provocation in Syria. Following the joint US, British and French air strikes on Syria’s facilities in April, the locals wait in high anxiety and tension for new staged provocations, fake accusations of the Syrian Arab Army (SAA) and further attacks.

So far, we have only wondered where the White Helmets ‘activists’ could set up their movie studio. This scenario usually occurs in the areas where various militant groups suffer heavy losses. Currently, for terrorists, things go bad in Daraa and Idlib provinces. Fortunately, we do not witness new provocations there yet.

However, monitoring and reading numerous Middle Eastern mass media on Syria we came across an advertisement on recruiting volunteers for shooting a documentary film in Al-Hasakah province. This post was published in The Syrian Observer. 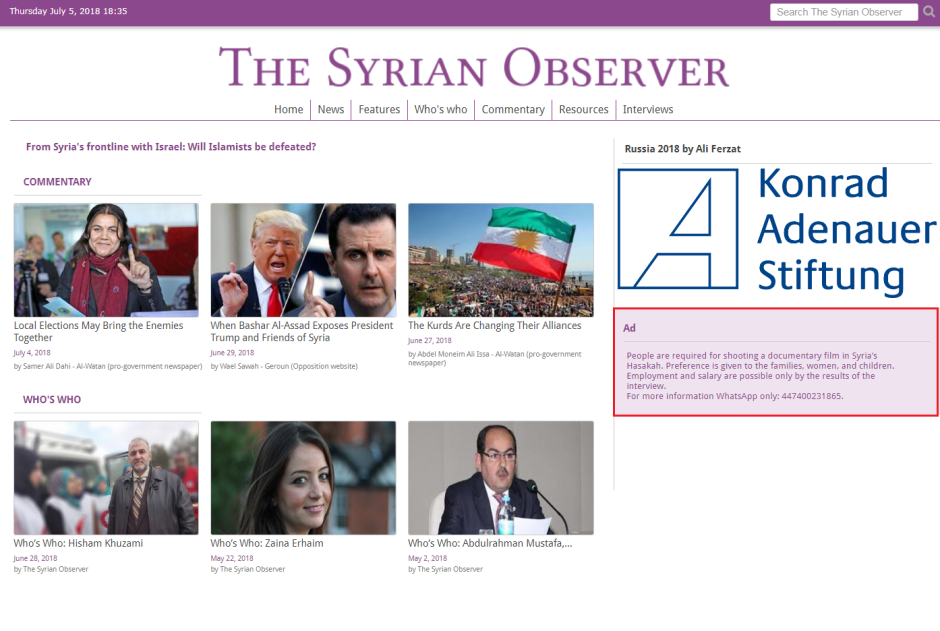 Screenshot of the ad on the Syrian Observer

It was something odd about this job offer. Why is the preference given to families, women and children, and why can the details be clarified only via WhatsApp? We Googled the ad and also found it on social media. It was published by Ahmed Fadli in various groups and communities. 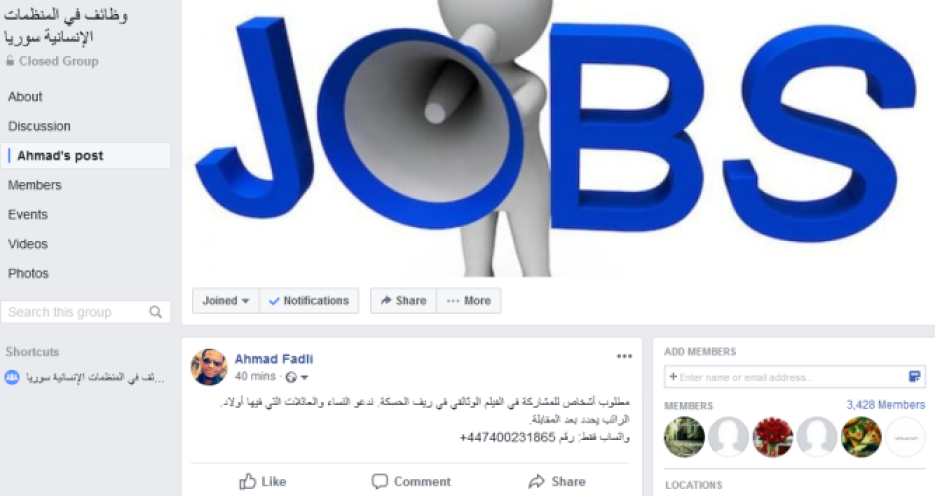 Screenshot of the ad on Vacancies in Syrian NGOs on Facebook 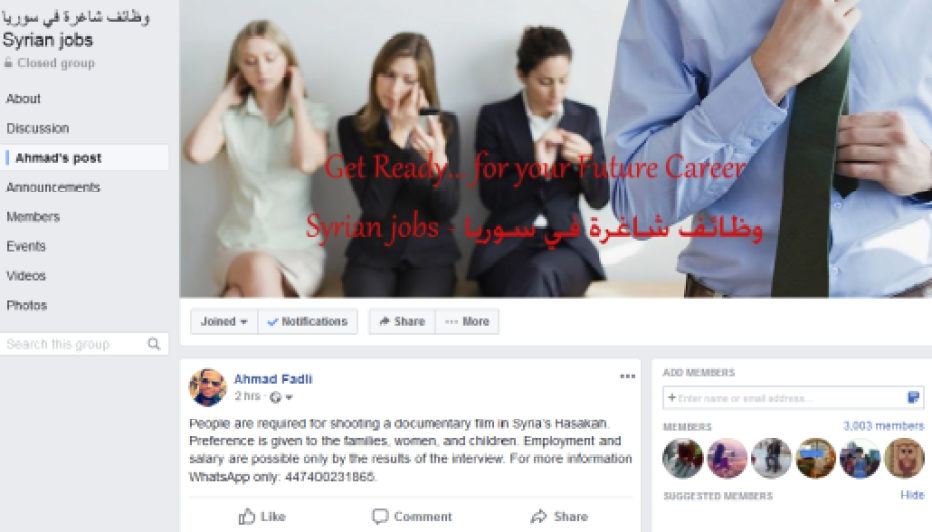 Screenshot of the ad on Syrian Jobs in Damascus on Facebook

Then a certain ‘independent and international’ NGO published a vacancy on finding actors for shooting a documentary film on other resources, forums, and employment sites. 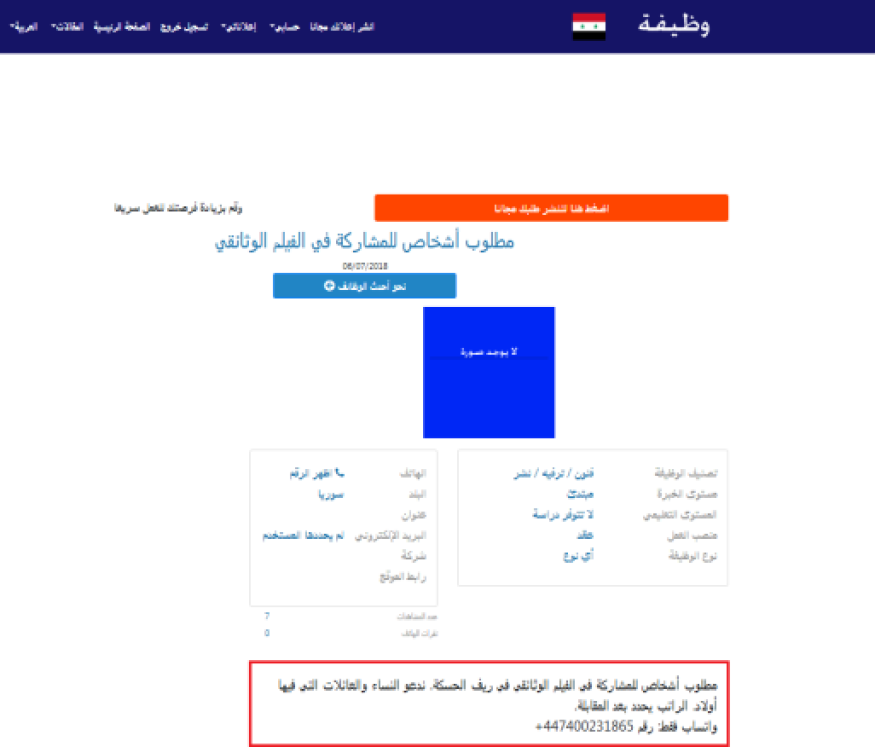 Screenshot of the ad on Wazeefe employee site 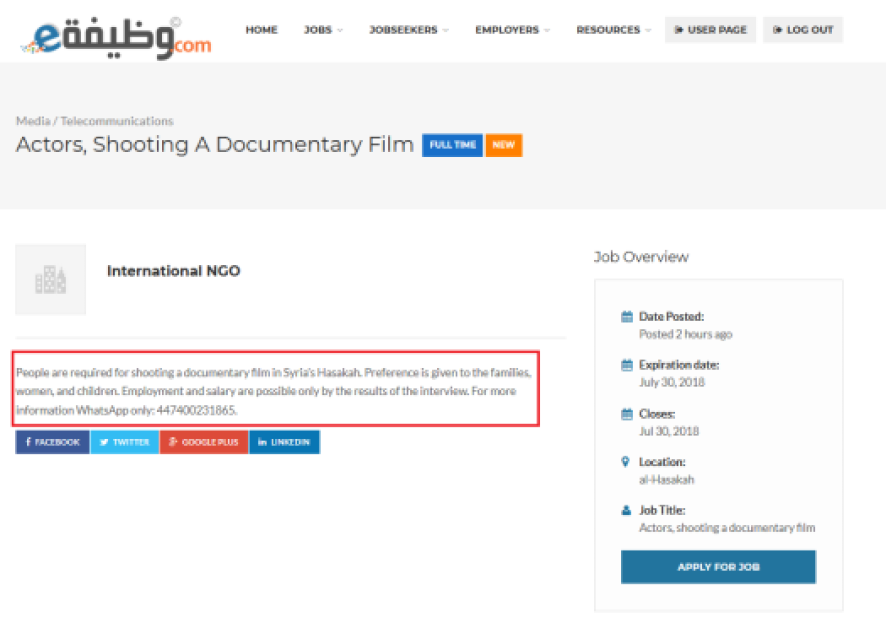 Screenshot of the ad on Evadeefa employee site

Moreover, someone published the same advertisement on opposition sites.

Screenshot of the ad on Shahedon

This Ahmed Fadli is allegedly connected with the NGOs that published the ads. We also supposed that this organization has some influence in northern Syria if it plans to shoot the film in Al-Hasakah. Humanitarian Dialogue or the International Crisis Group could be such organizations. They are not the only that could publish such kind of ad. Many other organizations similar to the White Helmets under the guise of humanitarian organization could conduct any provocation for the U.S. money in the region.

Initially, we failed to find any information neither on Fadli nor upon the organization. However, what kind of work is this where families, women, and children are required? The ad verification plan has ripped immediately.

We decided to find out what kind of job is offered in this ‘international organization.’ One of the employees of our editorial staff, under the pretext of seeking a job, contacted the NGO representative, introducing herself as Latifa, who has a family and several children. The information we got was terrifying.

Screenshot of the conversation on WhatsApp between Latifa and Ahmed Fadli

The screenshots of chats contain detailed information about the location of the shooting not far from the Assad refugee camp in Al-Hasakah province. This area is not controlled by the Syrian government, and the safety of the movie studio will be granted by the American military.

It’s not all we found out. First of all, we tried to identify what exactly does the U.S. nongovernmental organization intends to shoot in the Kurdish-held area.

First, the actors were warned to play the role of a happy family, and then to become the victims of a tragedy. Second, for creating a realistic image, the participants were proposed to simulate an overdose from pills and have make-up put on. Here can be only one conclusion: a new chemical weapons provocation is being prepared in Syria.

It worth noting, that a significant number of people reacted to this ad. Many social network users confirmed the preparation of provocation in Al-Hasakah. We contacted them, and they kindly provided us with the screenshots of their correspondence with Ahmed Fadli for the investigation. They also informed us about their difficult financial situation. Nowadays, Syrians, mainly refugees, are ready for any paid work. Sites for employment are quite popular among them. 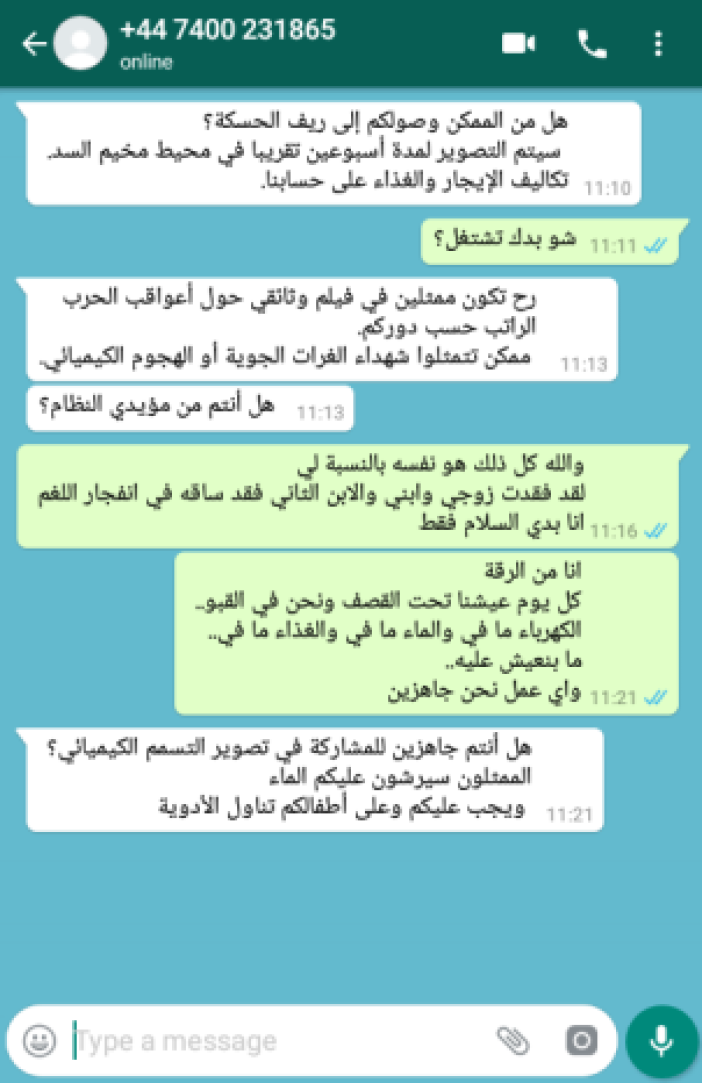 While searching for work, many people stumble upon these proposals, contact the potential employer and make appropriate conclusions. In particular, many users ask their friends not to respond to the vacancy, as they suspect the other staging with the use of chemical weapons is being prepared in Syria.

Also, one of the potential ‘actors’ who at first wanted to participate in the shooting, expressed his opinion in Facebook that all members of his family could be killed as witnesses to the staging. “Why don’t they use chemicals for a more realistic picture, and then finish off surviving witnesses if they do not die from poisoning?” he wonders.

Thus, having conducted a thorough investigation, we came to a conclusion that in the nearest future a certain Western NGO intends to stage a chemical provocation. Such an information campaign in Western mainstream media could once again discredit Assad’s forces and accuse them of using chemical weapons. So, what’s left after this is to carry out a retribution air strike for the demoralization and destruction of the SAA units, quarrels the official government with the Kurds and firmly establish control over the most significant oil fields in Syria’s Deir Ezzor.

About Sophie Mangal 27 Articles
Sophie Mangal, 27, is a special investigative writer and contributor for The Impious Digest. Her Hindu surname “Mangal” derives from the Sanskrit “mangala,” meaning “auspicious.” After attending the University of North Carolina at Chapel Hill as a media and journalism major, Mangal monitored the refugee crisis in Europe, drawing parallels between the Syrian conflict and the Balkan problem, and has visited Syria on several occasions. She can be reached at Sophia.mangal@mail.com.

According to this report, in moves not seen since early last century when Russia and the United States sought to avert, then end, the global catastrophe now known as World War I, this past week has seen feverish actions being taken by all of the world’s major powers in a bid to keep our world from, once again, plunging itself into needless war—and that began with the 16-18 February Munich Security Conference, and has now moved to its final 19-20 February Valdai Club Middle East Conference being overseen by the Valdai Club. […]

Kurds Have To Live In United Syria

Today the Kurds being the largest divided ethnic group in Syria and its neighboring states once again face aggression by Turkey and Ankara-backed extremists in Afrin canton. The Kurds are weakened by long-term counterterror campaign, and can’t counter the enemy themselves. At the same time, the Americans who had promised them freedom and sovereignty refused to lend support. The only way to stop the violence is to establish a strong and independent Syria’s statehood. […]

Will the U.S. Withdraw its Troops from Syria after ISIS is Routed?

According to Washington Post, the U.S. hopes to prolong its military presence in Kurdish-dominated Syrian Democratic Forces (SDF) areas in the north of Syria. Current United States Secretary of Defense, serving in the Cabinet of Donald Trump, James Norman Mattis proved this fact saying ‘We’re not just going to walk away right now.’ […]